This is a guest post from Ken Reibel, from Autism News Beat: http://autism-news-beat.com/about 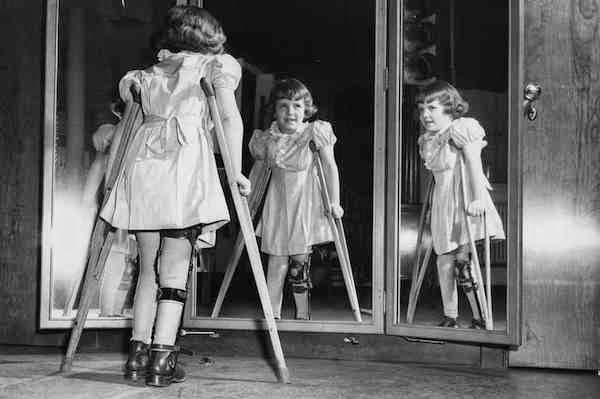 My Aunt Maggie contracted polio in 1943, at the age of 17. She was feeling fine, the story goes, when she boarded the bus home from summer camp. During the long ride, she complained that she didn’t feel well. Hours later, when the bus arrived in Detroit, Maggie had to be carried off. She was one of 12,450 cases of polio reported in the US that year.

Maggie lost the use of her legs, but escaped the dreaded iron lung. She lived a long life, married my dad’s brother, and gave me three really fun cousins. The family lived in a modest ranch home in a Detroit suburb. My uncle, an electrical engineer for ConEdison, built a wheelchair accessible house with no steps and wide doorways. She did the laundry, cooked great meals, celebrated the holidays, and even drove a car with the break and accelerator functions on the steering column.

Maggie seemed to savor the world from her wheelchair. She loved wild birds, and she was an amateur mineralogist. I loved it when she identified the rocks and pebbles I plopped on her lap. “Oh look at that!” she’d squeal in delight. “That’s kyanite! Where did you ever find this?” To an eight-year-old this was like a super power. Every rock, I learned, had a story, and my Aunt Maggie was the story teller.

Polio never defined Maggie. She wasn’t one to complain about her disability, but she didn’t take it lightly, either. I learned very early not to play in her wheelchair. “That’s not a toy,” she said. “And you don’t want to spend your life in a chair.” Polio was dreadful, a tragedy that, thankfully, would never stalk my generation, thanks to a great man named Salk.

Maggie passed away on a spring day, in her chair, while watching the wild birds in the feeder just outside her kitchen window. She couldn’t have planned it any better.