I was born in Corpus Christi, Texas. My folks split when I was very young, and my mom moved to Arizona. I moved back and forth between her and my father in Texas.

My mother is the seventh generation of a ranching family, land rich and cash poor. My daddy was a great deal older, born in 1938. He never passed the 7th grade. My family was poor – what you would call trailer trash. But we are honest, hard working, and kind.

Illness is no stranger to my family. My grandmother had uterine, breast, and cervical cancer and beat them all in the years those were still a death sentence. She was a very brave lady, and also very kind.

I got married at 19, and moved to Washington State with him. His family had money and saw me as poor white trash.

It did not work out. He was cold and abusive. I nearly died of pancreatitis. He came to the hospital once while I was sick to ask where something was in the house and not another word. In August 2008 I left him with the clothes on my back and my kids, not wanting anything else.

To get even, he tricked me into losing my children.

I was homeless for a while. I surfed couches.

As I was packing my bags, I stumbled across the Myspace page of my old sweetheart, who is my current husband. During my first marriage, my mom told me he had come back for me, as he promised… but I was married and had moved away. I sent him a message. I got back a message, saying he still had the rings I gave him.
We got back together…

My current husband’s father had a run down trailer/cabin that he let us stay at. We went door-to-door for work. When that failed I had to fish for my dinner and when that failed I starved, going from 243 pounds down to 137.

My current husband and I worked very hard and climbed slowly up the ladder. We have a rental house now, and food. Because of my health problems – the HPV related ones - I've been out of work for a year. That makes it harder. We struggle; we still have to let the house get cold to be able to pay the bill. My eyes are used to the dark because I hardly ever turn on a light. But we deal: I was raised by people with spines of steel. You can cry or get back on the horse. Either way, the work’s gotta get done.

But my husband is so well respected at work he has been promoted four times in three years, and beat out people with 20 years or more seniority. I’m very proud of him. 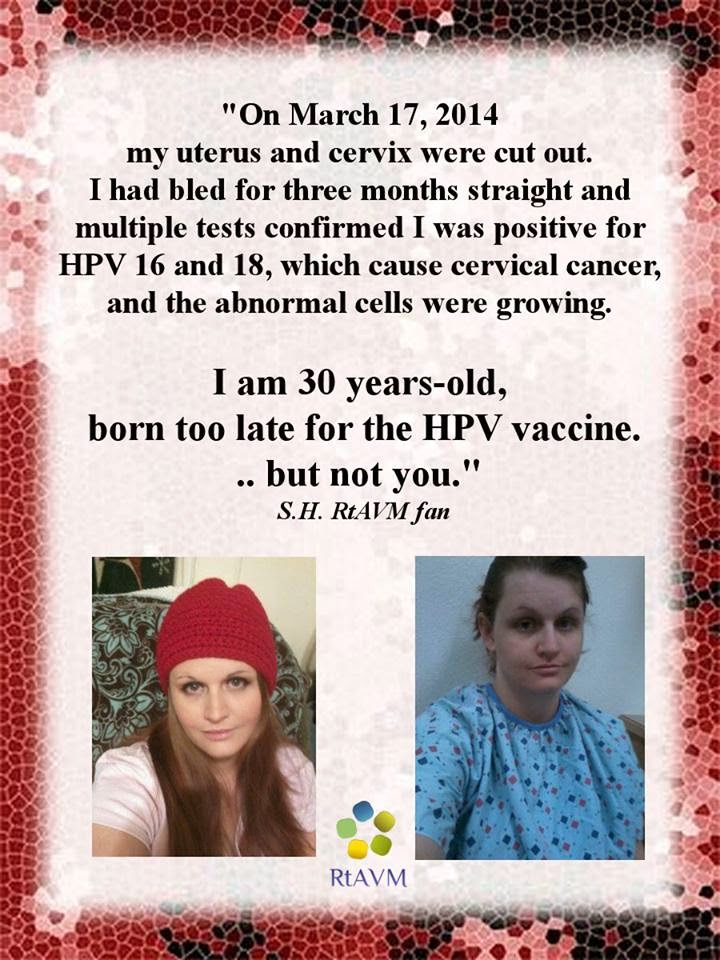 Stephanie's meme is provided courtesy of Refutations to Anti-Vaccine Memes (https://www.facebook.com/RtAVM) and Stephanie herself

In March 2007, while I was still married to my first husband, I got massive pancreatitis, and was hospitalized for nearly a month, almost died.

When I woke up in hospital, they told me: "You have to have surgery... and oh by the way you are pregnant.”

I survived the surgery and so did my baby. When they released me, I scheduled my first Ob/Gyn appointment for my pregnancy. The doctor did a Pap smear. It came back bad. I was HPV positive for both strain 16 and strain 18 (strains 16 and 18 are responsible for about 70% of cervical cancers -  - and are in the HPV vaccines). Since I knew I hadn't been HPV positive with my first child, and I knew I'd been faithful, my husband had to fess up           and admit that he had an affair.

My second child was born. At that point, the HPV was not directly affecting my life. The misconception is that HPV causes warts but that is not the case with types 18 and 16. They rarely if ever cause any outward symptoms.

Over the past six years, I’ve had many Pap smears, and all came back HPV positive, with abnormal cells showing. A good majority of women get rid of the virus. Not me.

In December 2013 I began having vaginal bleeding. Imagine the worst period ever times ten. And it didn't quit except for a couple days here and there for three full months          .

I had another Pap and got an endometrial biopsy. That’s where they stick a sucky tube into your uterus, with no pain medications, and suck chunks of meat from inside it to send off for tests. It hurt. I thought I was dying          . Then they did a colposcopy. Basically the doc looks at your cervix with a big old microscope (doesn't go inside you) and then if they see anything that looks like it might be cancer they use these little alligator mouth looking pincher things and bite chunks out to send off to be tested. But for this, they did numb me, so it wasn’t as bad as the endometrial biopsy.

I got the test results back, and the HPV was active, with abnormal cells actively growing. But my doctor said: “Oh, let’s just wait and see.”

At my  next gynecologist appointment I dragged myself into her office, and said: "I’ve checked my family history back eight generations. On both sides three quarters of my female blood relatives had gynecological cancers. My grandmother alone had three. I am positive for both the really bad types of HPV (16 and 18). You keep finding abnormal cells, and other doctors have found them too for now going on six years. My HPV obviously is not and never will clear. Is it beyond the realm of understanding that no matter what I do or how vigilant I am, every road leads to a hysterectomy?          ”

She told me: “Given your bleeding, your pains, your family history, it seems like the wisest move to make.... and while we are in there we need to look for other things as well.”

I went home, I cried, and then made peace that I was lucky to have my two kids. My only regret is not being able to give my current husband a child of his own.

I scheduled the surgery the next day. I had it recently. I was in really bad pain after. Felt like the Rangers baseball team was having batting practice in my belly.  I have four two-inch incisions all over my belly and they are all starting to bruise.  I’m taking Vicodin every four hours, and I can't do anything for six weeks.

But do you know what hurts most?  A little before the actual surgery, my husband and I went out to eat at a restaurant. A group of happy families with kids and babies walked in. They were chatting and looked so perfectly content in life. Walking out to the car, my husband was very silent. He never had children of his own. Then, when we got in the car he said: "Well that really sucked, I’ve never been more depressed in my life... I will never have that." He meant that he will never be able to have children of his own with me.

When you are reduced to death from cancer, or losing your womb... most women choose to live and suffer the emotional pain. Two shots, two darn shots could have made that moment in the car never happen.

Acknowledgements: I am very, very grateful to Stephanie for sharing her story, in her unique style. I am grateful to Liz Ditz and Alice Warning Wasney for editing comments, and to RtAVM for the meme.
Posted by Unknown at 8:20 PM