Meningococcal: Stalker of our young.

Chuck was an “Artful Dodger of a cad”, says Maggie. At 14, the 9th grader was vibrant, full of energy, engaging and funny. “He was a redhead, freckly, cute as a button boy. He really did light up the room.”  He had “a little dyslexia” but nothing too serious. Maggie was an experienced teacher, and in her judgment Chuck was going to be “absolutely fine”.
He wrote her a letter one day. He told her that although she was hardcore, and gave them no breaks, he appreciated the fact that she shouted "Safe and sane!" every Friday.
Because of his parents’ divorce and his anger at them, Chuck ran away from home. No one knew where he was staying: each parent thought he was staying with the other, while he was actually staying with a friend. Maggie knew something was wrong, but did not know exactly what.
Maggie does not remember if it was Monday or Tuesday. Chuck had “a horrid headache” in class in the morning. He kept putting his head down. Maggie kept rebuking him. She told him to go to the nurse if he was sick. If he was not sick enough to go to the nurse, he should sit up in her class. A girl sitting behind Chuck massaged his neck and shoulders, and told him to “come on.” Maggie told her to “keep your hands off him, we don’t want to reward him for being lazy”.
Later that afternoon Chuck was caught shoplifting. His headache got so bad he really needed aspirin. Since he was a runaway, he had none. So he stole some from a store, and got caught. He was in such bad shape at that point he was taken immediately to the Community Hospital. They could not save him. He was dead by 7 pm that night.

When Maggie arrived at school the next day, she saw a school counselor that worked with Chuck. The counselor said: “Maggie, I need to talk to you about Chuck.” “Yes,” agreed Maggie. “We need to get him pinned down.” “No, it’s not that,” said the counselor. “He’s dead.”
Maggie described this as devastating. Devastating to her, devastating to the community, and above all to Chuck’s parents. Maggie says, “His parents were absolutely heartbroken. They were so immersed in their own little drama that they felt guilty that they have not checked with other. And he was an only child.”
In addition to the psychological consequences, she remembers that everyone who came in touch with Chuck – 1400 children, all the adults that had contact with him, and their family – had to take Rifampin for a month. Maggie had two little girls, also at risk, also now on the medicine, as was her partner. She was frightened.
Two weeks after Chuck’s death a girl burst into tears in class. She was crying orange tears, from the medicine.
Meningococcal disease struck Maggie’s students twice more, in 1998 and 2000. This time the victims were undergraduate students in classes Maggie was teaching as an Adjunct Professor. Again, the students had a bad headache, and were dead shortly after. Maggie says: “What’s amazing is how fast they go from I don’t feel so well, or I got a really bad headache, to dead in about six hours.” There was a vaccine available at the time; but it was only recommended for high-risk groups. The vaccine was recommended only after the new, conjugate vaccine was licensed in 2005.[1]

******
Meningococcal goes for our young. Children under 5 are most at risk, followed by adolescents . People who live in close quarters  - like college students in dorms – are also at risk.[2] It kills 9-40% of the people who catch it, depending on the form it takes.

Young Landan Harris was one of the victims of the disease. A happy, beautiful toddler, he was 3 when he died. 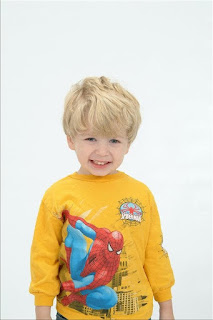 Picture taken from: http://www.meningitis-angels.org/LandanHarris.html, with permission from Lacey, Landan's mother.

He was crabby in the evening. His mother described what happened next (the text is taken verbatim from the site his mother, Lacey created to honor her son’s memory):
“At 9am I woke up to find Landan laying on the floor next to my bed covered in, what looked to me, like bruises. I thought he was dead, I was so afraid to touch him. I called my mom & then called 911. We took him to the best children's hospital in the area ....
His left foot was completely purple, so were his entire back & nose. His other extremities were very splotchy purple. ... If Landan would have made it he would have had several amputations. But selfishly we would have taken him any way we could have him as long as he was still here with us.
Landan fought for 23hrs [sic] at the hospital enduring 3 hyperbaric treatments. The treatments were helping bring back color to the purple areas. They said it was a miracle he lasted as long as he did, that's why are [sic] hopes were high.
His little heart finally couldn't take it anymore & stopped, we watched them doing chest compressions & then the doctor stopped & my mom asked him if Landan was gone & he said yes, there was no more brain function. I still was unable to cry at this point, I couldn't believe what I'd seen with my own eyes & that he was gone.”

Landan’s mother Lacey created a YouTube dedicated to his memory.

****
About 20% of those who survive the disease will have lasting damage, including  “hearing loss, neurologic damage, or loss of a limb.”

Here is one such little girl: 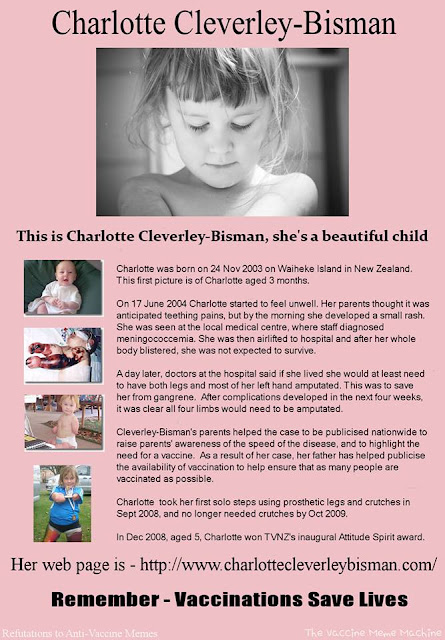 Courtesy of: https://www.facebook.com/pages/The-Vaccine-Meme-Machine/302477036534120, who got it through Charlotte's website, http://www.charlottecleverleybisman.com/.

Other pictures of the disease can be seen here - scroll down for pictures of children suffering from it. Warning: these are hard pictures.

One of the problems highlighted by the National Meningitis Association is the lack of awareness of the vaccine.  In the United States, the vaccine is recommended for teenagers but parents may not be aware of it. Losing a teenager or young adult is always painful; losing them when there was a vaccine available, and it could have been prevented, but you did not know, is excruciating.
Somestates now require the vaccine before a student can enroll in a public university, and others require that students and parents be given information about the disease and the vaccine. Hopefully, this can help raise awareness among parents, teenagers and young adults, and help protect them.

The vaccine is also recommended for high-risk toddlers and infants but notroutinely for toddlers or babies.  In contrast, in Australia thevaccine is recommended at the age of 12 months. The currently used meningococcal vaccine covers only certain types of the bacteria, and it does not cover strain B, the one responsible for more than 50% of the cases inchildren under one. So there is no recommendation of the vaccine for routine use in young children. A vaccine that covers strain B was approved in Europe but as far as I know is not currently in use. Several vaccines that cover it are currently at different stages of testing in the United States.

Lacey, Landan’s mother, strongly urges parents to get the vaccine for their young children as well, if they have access to the vaccine and can afford it, imperfect as its coverage is. She wants to protect other children from what happened to Landan.

Acknowledgements: Thank you to the National Meningitis Association, Alice Warning Wasney, Clara Obscura, and Paul Offit for advice and help on this post. Thank you to Maggie and Lacey for sharing their story.